The hognoses's cage should grow with it. That is to say: the smaller the snake the smaller the cage. The cage of a fully grown pair of hognoses should be at least 31,5 x 15,75 x 15,75 inch. Bigger cages are no problem as long as the snake eats reliably.

A terrarium is the best way to keep those animals. Keeping hognoses in racks is no problem, too.

It is important to offer the snakes at least one hiding place which has to be deep seated and which is impossible to undermine because toppling furnishings are a possible danger to the snakes and can severely injure or even kill them. Climbing objects aren't necessary but some hognoses really like them. It's not advisable to use real plants within the cage due to the fact that hognoses tend to dig them up frequently.

A water bowl in an adequate size is essential, too, because some snakes like taking a bath.

Given that those animals like digging, the substrate should be easy to dig and at least 3-4 inch high. We are using dust free softwood granules (for example: Tierwohl Super). For a more naturalistic cage you can also use a mixture of peat moss, vermiculite and aspen snake beeding. Sand is not suitable due to its rough structure because it can cause a deformity of the nose which can lead to breathing difficulties. If normal animal litter is used, it is absolutely necessary to pay attention, that the litter is being dust-free because the dust exposure can damage the lungs on the long run.

Just like many other snakes, hognoses need to have different temperatures within their cages and over the day, too. The basic temperature in our racks is located between 80° F and 82° F and the warmest area is about 88° F. Temperatures up to 91° F are basically no problem as long as the snakes can back out to a cooler area. The night setback should be settled between 73° F and room temperature (around 68° F).

Heterodon are used to different temperatures due to their huge range in the wild and are therefore easy-care in this point. But if there are feeding problems it could be up to the temperature. The favored temperature is reached best by a radiant heater which are installed at the ceiling of the tarrarium. If you use heating mats or heating cables you have to make sure that theyare out of reach of the snakes because they could be dig out by them.

The humidity in the cage should be located between 40% and 60%. Only during shedding hognoses need higher humidity. The best way to reach this humidity is with a wet box if you don't want to spray daily. The wetbox should be filled with sphagnum moss which has to be kept damp. In smaller cages an ordinary damp swamp is sufficient, too. It should be placed within the cage as soon as you notice that the snake starting to "go blue". 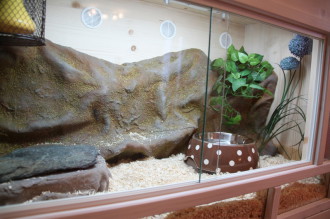 Example for a hognose cage

Hognoses are really easy to handle. They would rather puff and hiss than bite you. We have rarely experiecend snakes as easy to handle as our hognoses.

Should the snake start hissing while you are opening the cage just pretend that you don't notice. 99% of the animals calm down immediatly as soon as they are on your hand. We also experienced that hognoses getting more trusting and calmer if they are taken out more often.